What is plowing? Strong points, weak points and alternative methods

Since almost a thousand years, plowing technique has considered one of the main soil preparation procedure: rolling over the clods allows to bring the soil back to its initial structure and start with the seed bed preparation. However, how this technique should be performed? When should it be done? Which kind of benefits and drawbacks does it bring? In which manner plowing may affect the soil and the surrounding environment? In this article we will discover plowing in detail, its objective and its’ alternative methods. 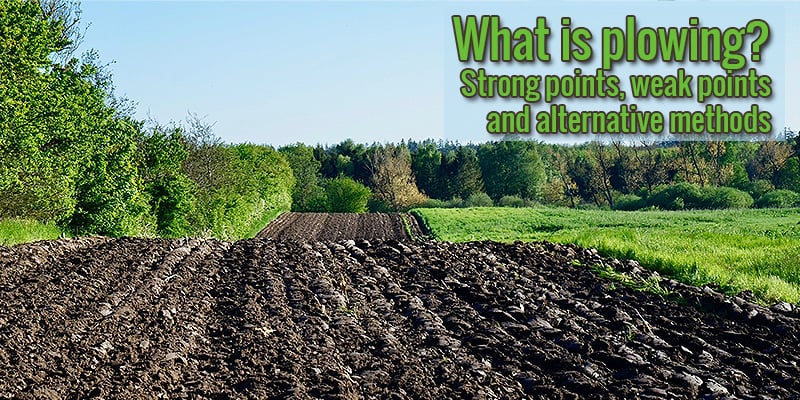 What is plowing? What is it used for?

With “plowing” it’s intended that process which allows to remove horizontal clods from the soil. The clods then will be rolled over and destroyed in order to bring the soil back to its original phase, helping the passage of organic substances, providing space and nutriments to the new crop.

Usually, plowing is done at the end of the harvesting process. The aim of this technique is in fact to eliminate the weeds and most of all the residues of the previous crop, bringing them down in depth so they cannot influence the growth of the plants. In this way it’s possible to soften the soil and gradually prepare it for the next crop. 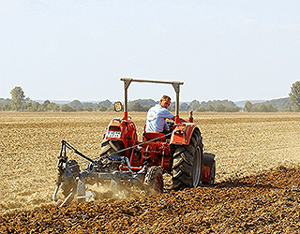 The implement used for plowing are called in fact “plough”. They are pulled by the tractor (usually with high number of HP) and they can be ploughshare or moldboard version. The plough can work at different depths:

Plowing can be performed in different periods during the year, even though the best results are obtained in the mid-seasons. With autumn plowing in fact, crop residues, organic fertilizers are buried down the soil in a contextual period, with increase of rainfalls and lowering of the temperature degrees. In this regard, a lower temperature implies frosting and defrosting action, causing a quick breaking of the clods.

For what concerns springtime, plowing has mainly a prevention goal. It’s performed just before the seeding to avoid the hardening of the clods, caused by the gradual appearance of the sun and of the warm.

On the other hand, during summertime, plowing is usually reserved to clayey soil, which has particular needs (for example, becomes impractical during the heavy rain, typical of autumn season).

Which are plowing benefits?

There are various reasons because, still today, plowing is considered a very important technique for the seedbed preparation. Here below we will analyze the main advantages which can be brought by this process.

Which are plowing drawbacks?

With the technological innovation, more often plowing has become a subject of discussion for agronomists and farms. This technique in fact, brings also some disadvantages, which move in opposite direction in relation to eco-sustainability. Here below some of the drawbacks brought by plowing:

Which are the alternative methods to plowing?

Above all, considering “sustainable agriculture” principle, as time passed by, different alternative methods have been invented. Their main objective is to not work too deep if not necessary, limiting by consequence the intensive use of polluting fuel.

The first method is called “seeding on hard soil” or “direct seeding”. It is mostly used for cereal crops and consist in seeding on soil still covered by residues of the previous crop or by “cover crops”. In this way, various phases of mechanical tillage are eliminated, increasing the natural fertility of the soil. 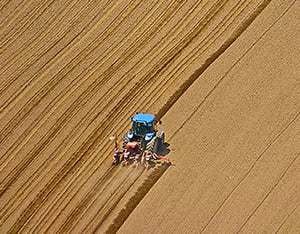 Another alternative technique the minimum tillage, which is performed by the stone buriers. These machines work less deep than a plow, not effecting too much the soil structure. Furthermore, they are specifically designed to get an optimal seed bed preparation since the very first passage, avoiding by consequence additional working phases and further costs.

Especially, Forigo Roter Italia stone buriers are able to bury previous crops residues, stones and cover crops, allowing at the same time a good refinement of the soil. This means that after the passage of the stone buriers, the ground will not be divided into big clods anymore, it will be evenly crumbled instead, ready to host a new crop.

The new field will show all the benefits as if been tilled by a plow: it will be optimally structured and perfectly waterproof, granting the equilibrium of its biodiversity. Furthermore, working on surface, stone buriers will avoid the risk of creation of the hard pan layer, keeping the soil fertile as time passes by. All of these benefits can be brought without exceeding the fuel costs and without causing a huge environmental impact.

Plowing is still one of the most used tilling technique, also today. It has however, two faces: on one side we find a better weed control and a total restoration of the ideal soil structure, making it ready for the next crop. On the other side, the use of tractors with higher torque than normal, result in an increment of machines and fuel costs, as well as creating an unbalance of the biodiversity of the ground.

The alternative techniques have been invented precisely for avoiding the disadvantages brought by plowing; among those we find the direct seeding and the minimum tillage performed by the stone buriers.

We hope this article has been helpful for you and your business. If you need further information about plowing, do not hesitate to contact us; Forigo Roter Italia team will be at your disposal to clarify any doubt.